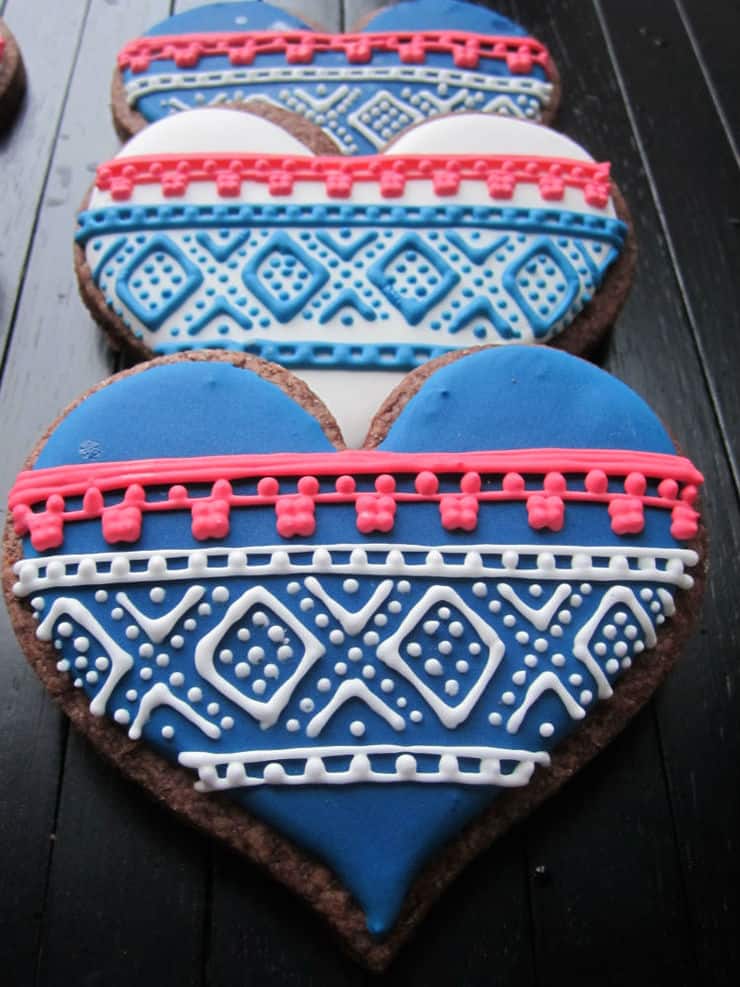 Since I live in Norway, I wanted to make a very Norwegian cookie for Christmas. As I was pondering what to make, I found a book of knitting patterns on my mother-in-law’s table (she’s an avid knitter), and I decided to leaf through it. The book was full of knitting patterns using the Marius design, the quintessential Norwegian knitting style. As I was later walking through town, finishing up my last minute Christmas shopping, I kept noticing sweaters with the Marius pattern hanging in windows or on racks of clothing. It sure seemed like I’d found my very Norwegian cookie design.

Start by making your cookies and allowing them to cool overnight. I decided to make chocolate mint cookies, but you can really use any flavor you want. You can also use any shape that you’d like for this cookie, but you’ll want to make sure it’s wide, otherwise you won’t really get to see much of the pattern. Once you’re cookies are cooled, you can give them their royal icing base. Traditionally, the Marius design uses a dark, navy blue base with white and red accents, but I’ve also seen a white base with navy blue and red accents. I decided to do both for my cookies, but you don’t have to; both are in keeping with the traditional design. If you’re doing both colors, you’ll need white flood icing, and navy blue flood icing. To flood these cookies, I tried a different technique this time. Instead of making flood AND piping icing, I just made a thicker flood icing (about 14-16 second consistency). I then flooded the cookies using a #3 tip and a toothpick to work the icing out towards the sides. You can learn more about this technique from SweetAmbs.

Once you’re royal icing base has dried (this will probably take about 8 hours), you can start adding the pattern. For both the blue and white base, you’ll start with the red icing. All of the icing that makes the pattern should be thick, just a little less rigid than piping icing. Starting at the top of your cookie with the red icing and a #1 tip, pipe three straight lines of icing so that they touch one another and form one thick line. Pipe another line of red icing just about a centimeter under the thick line, just far enough away that it doesn’t touch the others. Connect the lines by making small dots of icing. To make the square part of the red design, make four dots of icing (two across and two down). These squares should be two dots of icing apart (I’m including the blank spaces on the line in this number). 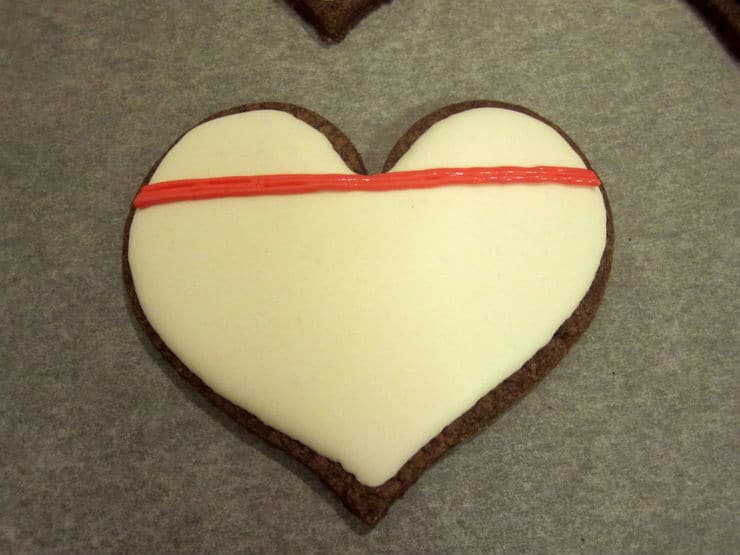 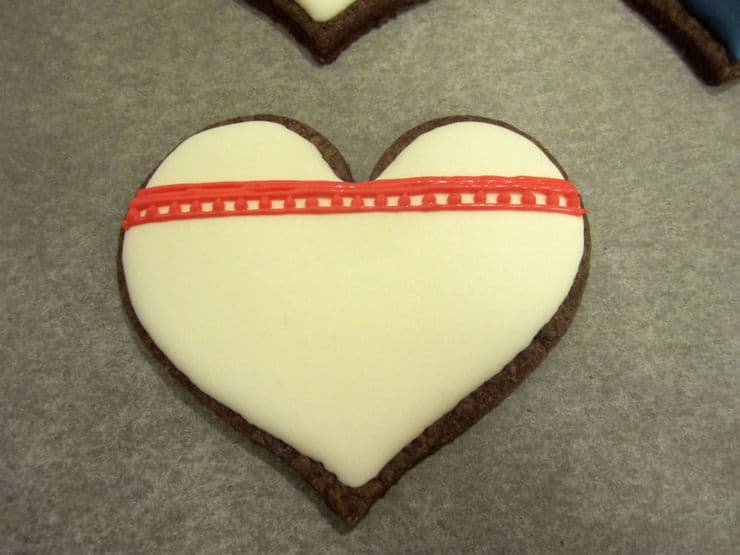 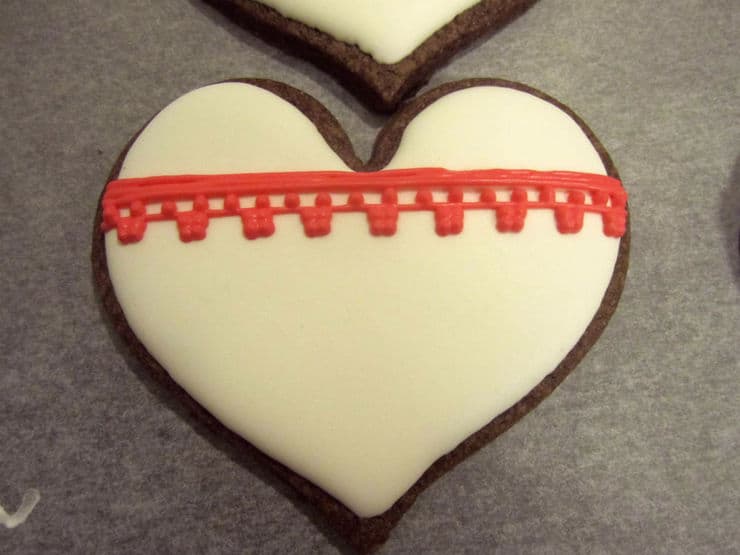 Once the red design is finished, you can move onto the blue/white design. If your base color is blue then you’ll need white for this part, but if your base is white, you’ll need blue. This icing should be the same consistency as the red icing. Start by piping two lines about a centimeter apart, and connecting them with small dots of icing. Starting in the middle, and using the band you just made as a guide to help keep your design straight, pipe an X shape using dots. The X should be nine dots down one side, and nine down the other. At this point, I like to pipe another band at the bottom of the X design with two lines about a centimeter apart connected by dots to help keep the design straight. You can choose to do this step now, or at the very end. Back to the X design, pipe two Vs, one in the top of the X, and one in the bottom. Add a small dot of icing at the top and bottom of the X. 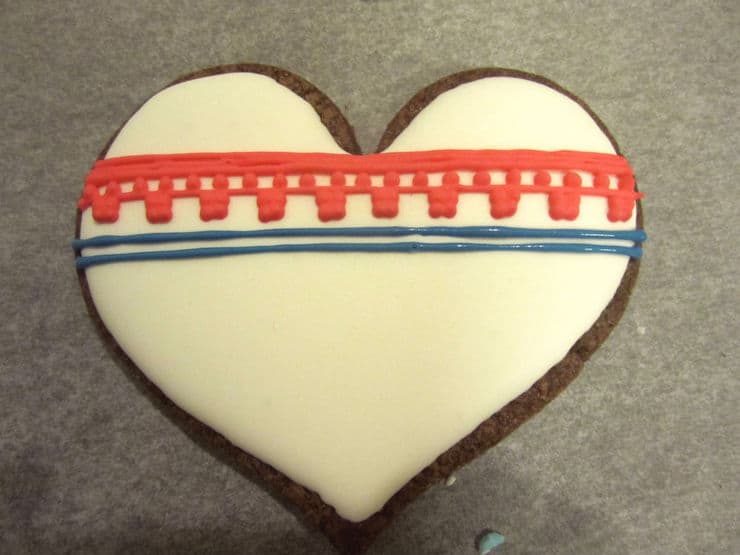 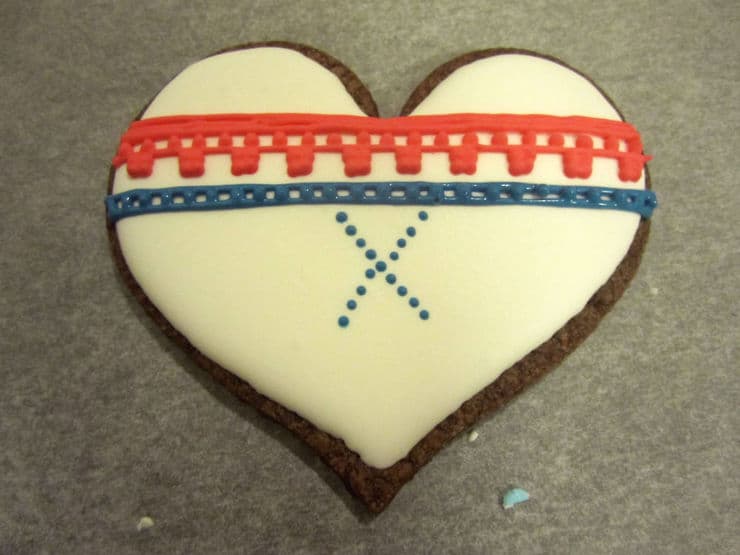 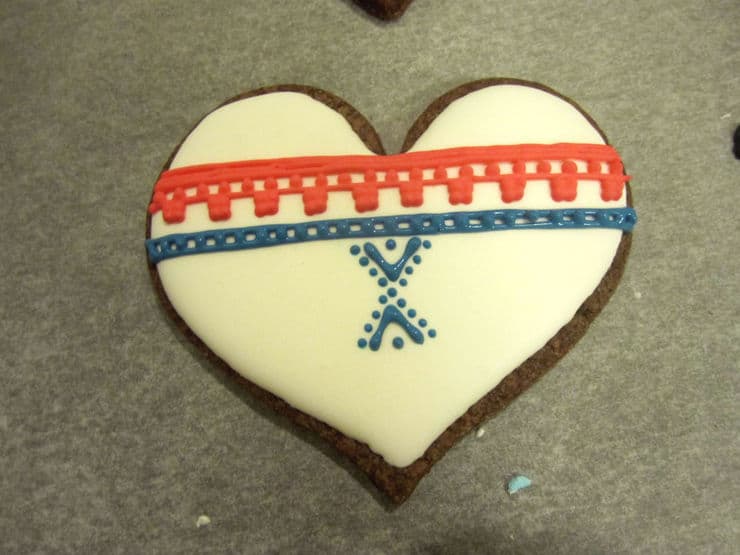 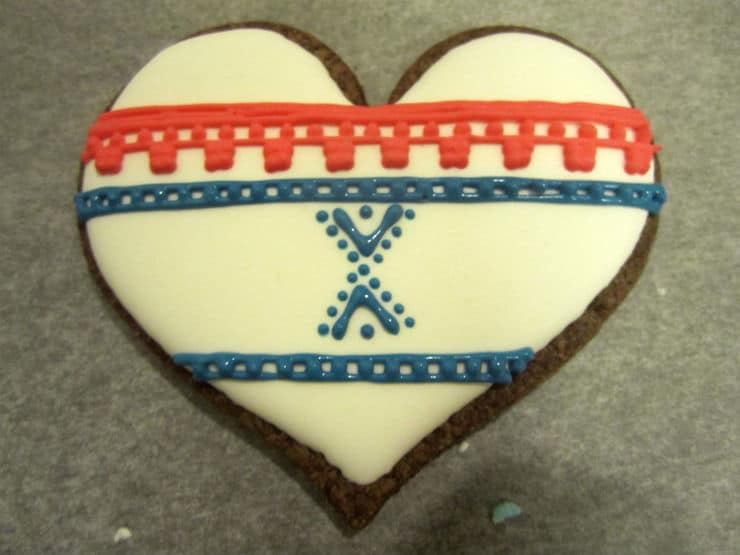 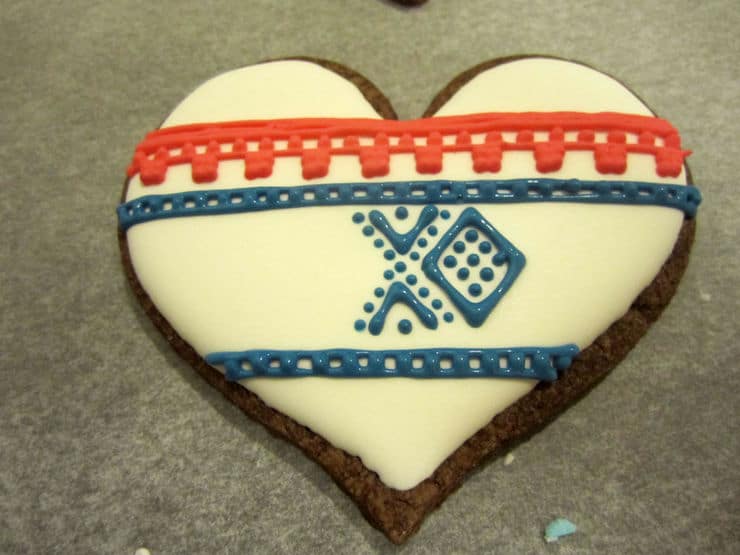 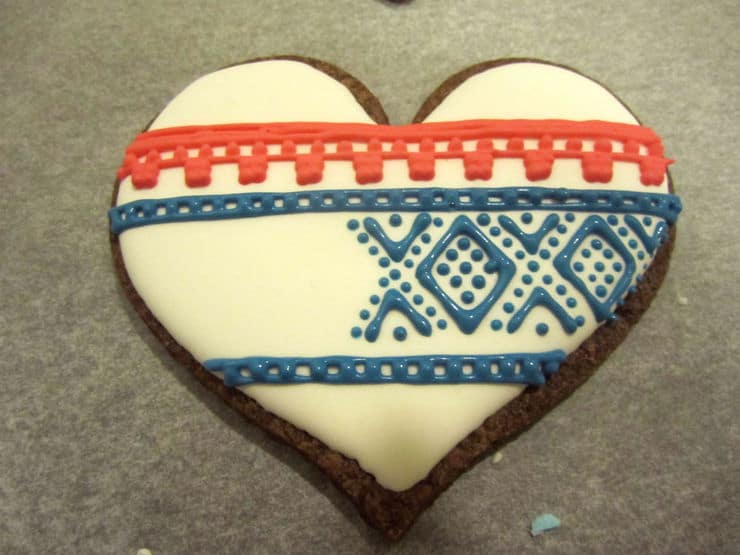 Depending on what hand you pipe with, you can now choose to start working your design to the left or right (if you’re right handed, go to the right, if you’re left handed, go to the left). Using the dots that make up the X as a guideline, pipe a diamond shape. Fill the diamond in with dots of icing. Make another X, using the diamond as a guide, and fill it in the same way you did the first. Continue this pattern until you reach the end of the cookie. Turn the cookie around so you can continue working in the same direction as before, and fill in the rest of the design using the same method. 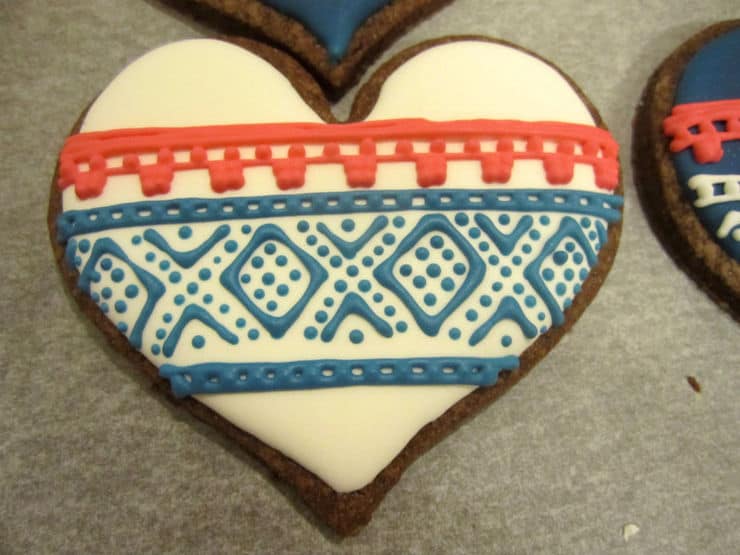 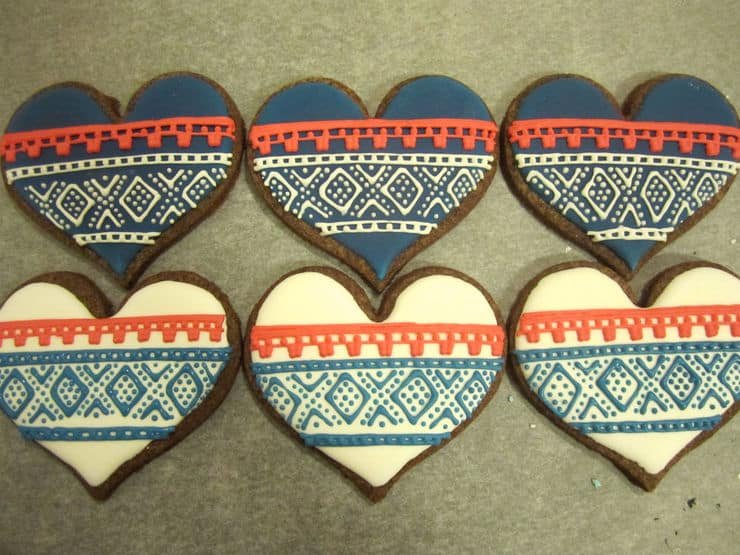 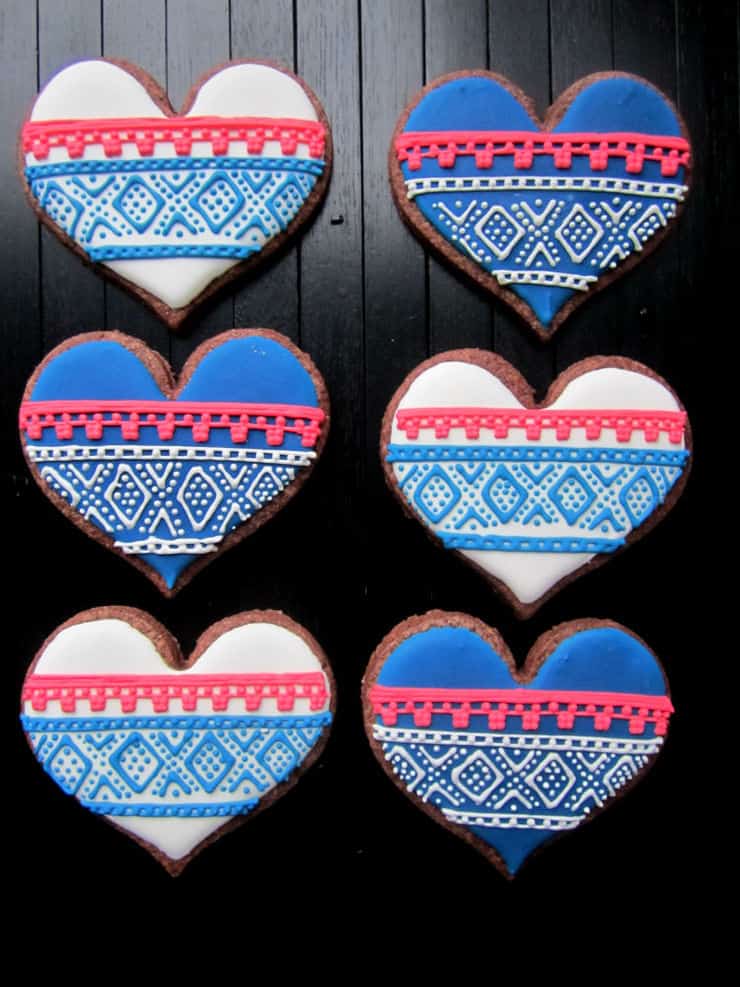 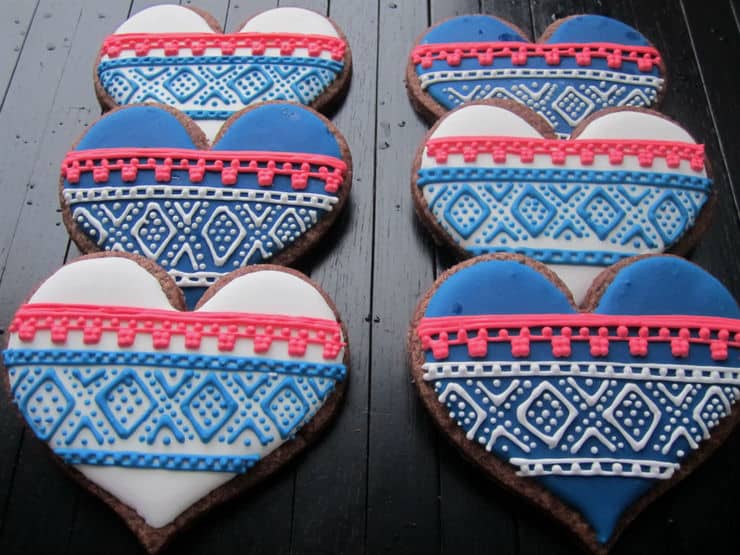 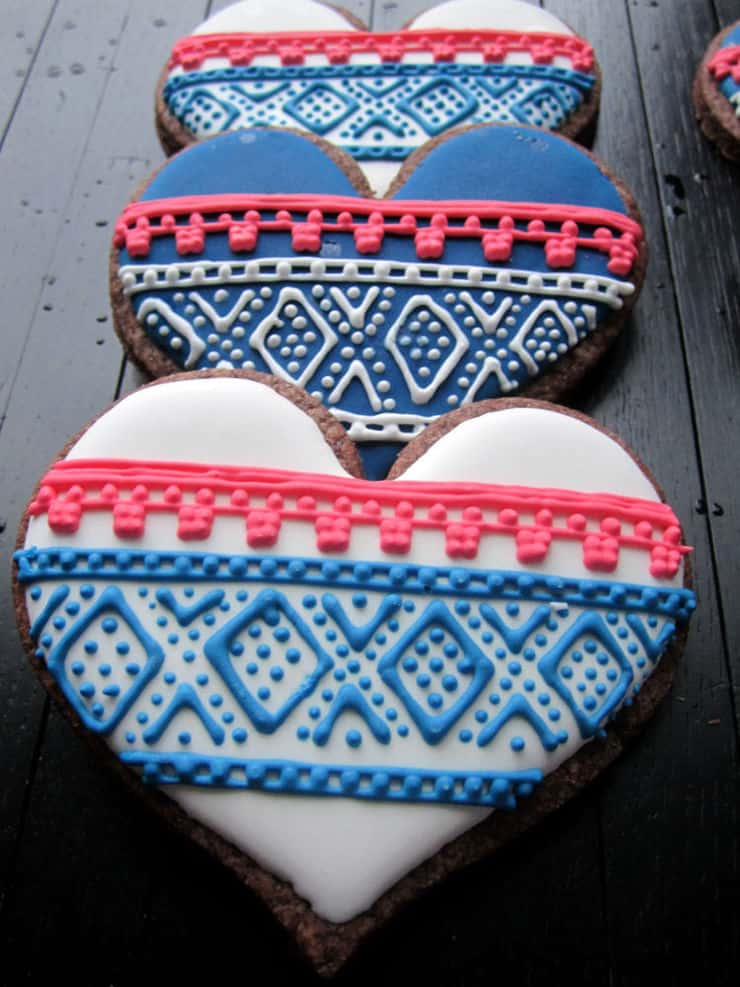