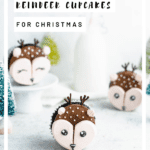 These all-frosting (no fondant necessary) reindeer cupcakes are sure to be a fun addition to your holiday dessert line-up!

Don’t get me wrong, there’s a lot you can do with fondant that’s hard to achieve with other sugar art mediums. BUT when was the last time you actually ate the fondant on the cake or thought “Oh, fondant, my favorite!” as you popped a piece of the flavorless, Laffy Taffy wannabe into your mouth?

Apparently I have some strong feelings about eating fondant.

But you know what I also feel strongly about? The fact that you can never go wrong with more frosting.

Whether it’s multi-flavored, straight out of a container or piled so high you’ll have to unhinge your jaw just to get that bite, I say yes, yes and that’s a medical bill I’m willing to take.

So if you’re ready to hop on the Christmas train to frosting town, first stop cuteness overload, keep reading to learn how to make these reindeer cupcakes.

Here’s how to make these reindeer cupcakes

If you plan to make your own cupcakes and are looking for something decadently delicious, I highly recommend my go-to chocolate cupcake recipe.

But if you need to save some time, there’s no shame in purchasing cupcakes (most grocery store bakeries will sell them to you sans-frosting) or using a box mix. You can make a box mix taste nearly homemade with these boxed cake mix hacks.

For these cupcakes, we’ll be using two kinds of frosting: A chocolate buttercream and a vanilla buttercream.

Since the chocolate buttercream will create the first layer of frosting on the cupcakes, you’ll want to start with that.

In the bowl of a stand mixer, cream the butter on high. Add the baking cocoa, powdered sugar and vanilla extract and beat on medium until smooth.

Repeat the same steps with the ingredients for the vanilla buttercream, adding a little brown food coloring so the frosting is a beige/light brown color, reserving a few tablespoons of the white frosting.

Melt a few ounces of dark chocolate and spoon it into a piping bag. Snip a small hole in the end and pipe antler shaped pieces of chocolate onto a piece of parchment paper. Be sure to make extras in case any break.

Spoon the chocolate buttercream into a piping bag with a large, round tip (I used an Ateco 809). Pipe a large dollop of frosting that fills up approximately half of the surface of the middle of the cupcake.

Try to keep the tip of the piping bag about 1/2″ from the surface of the cupcake so the frosting doesn’t get too thick.

Once all of the cupcakes are frosted, place a sheet of parchment paper onto a baking sheet.

Press the cupcakes frosting side down onto the parchment paper, gently pressing and rolling ever so slightly until the frosting presses its way out to the edge of the cupcakes. Refrigerate for approximately 5-10 minutes.

Peel the cupcakes off of the parchment paper.

Fill another piping bag with the light brown frosting and clip the tip to create a medium-size, round opening. Either free-handing or using a heart shaped cookie cutter to create a guide on the chocolate frosting, pipe a heart shape on the lower half of the cupcakes.

Once all of the cupcakes are frosted, use the same parchment paper technique to gently smooth and fill out the heart. Refrigerate for 5-10 minutes.

Using a warm offset spatula or butter knife, create a cut in the light brown frosting down the middle of the heart, leaving about 1/4″ of uncut frosting at the end.

Tint some of the remaining frosting black.

Use the black frosting to create eyes and the nose. With the leftover white frosting, create spots and reflections on the open eyes and nose.

With the remaining light brown frosting, use a leaf frosting tip (like a Wilton 366) to pipe ears onto the tops of the cupcake.

How do you make edible reindeer antlers?

Melted chocolate is a great way to make edible reindeer antlers. Simply melt the chocolate in a double boiler (bowl over a pot of boiling water) or microwave, spoon into a piping bag and pipe out antlers.

What’s the difference between American buttercream and other buttercreams?

The difference lies in the ingredients and how it’s made. American buttercream is simply butter and powdered sugar (and maybe a little milk and extract) whipped together, which produces a firm, pale off-white frosting.

Did you make this recipe? I’d love to hear how it went in the comments below. Better still, snap a photo and tag it on Instagram with #thesimplesweetlife. I love seeing your creations! 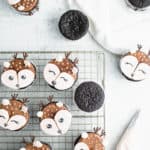 Looking for some easy Christmas cupcake ideas? These all-frosting (no fondant necessary) reindeer cupcakes have you covered!

For the cupcakes and decorations:

For the chocolate buttercream frosting:

For the vanilla buttercream: