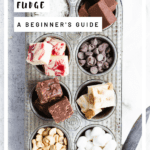 If you’re looking for a fudge recipe for beginners, look no further! In this beginner’s guide, you’ll learn how to make microwave fudge with just 5 ingredients. Be sure to scroll all the way to the bottom for easy variations and tips and tricks to help you tackle common fudge problems like a pro!

If you’ve ever wanted to try making fudge but felt daunted by the candy thermometers, precise temperatures and drip tests of traditional candy making, this is your sign to make this fudge!

All you’ll need for this recipe is five ingredients, a microwave and the patience to wait the full two hours for it to set before diving in (the latter being the most difficult).

And if plain ol’ chocolate fudge just isn’t doing it for you anymore, this recipe has one more trick up it’s sleeve: It’s highly adaptable.

We’ll start with the basic recipe and then I’ll walk you through a few variations based on the type of food being added that will help you understand how these additions change the recipe and how to make your own adaptations.

How to make microwave fudge

First, combine and melt your ingredients.

In a microwave safe bowl, combine the chocolate, sweetened condensed milk, and butter. Microwave for 30 seconds and then stir the ingredients.

Continue microwaving the mixture using 15 second increments, stirring between each session, until the chocolate stirs smooth. It should be thick and will pull away from bowl and spatula.

Add the vanilla extract and salt, and stir until combined.

Second, prepare the fudge for chilling.

Line a 9″x9″ square cake pan or casserole dish with parchment paper. I use two narrow sheets of parchment paper, which I clip to the sides of the pan using binder clips.

Note: You do not need to add any grease to your prepared pan.

Pour the fudge into your prepared pan and press it into place. Cover with plastic wrap or a lid and refrigerate for two hours, or until firm.

Now that you know how to make fudge, let’s talk about the near endless ways you can adapt this recipe.

Depending on the spice and it’s potency, you’ll want to add anywhere from 1/4 to one teaspoon of it to a full batch of fudge. This can be mixed in right before you pour it into the prepared pan and after you’ve mixed in the vanilla.

For my Mexican hot chocolate fudge (pictured below), I added 1/4 teaspoon cayenne and one teaspoon cinnamon.

To add nuts, dried fruits, marshmallows or other large, dry ingredients to your fudge, I recommend adding about a cup for a full batch. You may want slightly more or less depending on the size of the pieces. These kinds of ingredients can be folded in right before you pour the fudge into the prepared pan.

For the Mexican hot chocolate fudge (above), I added one cup of marshmallows.

Note: Some dry ingredients, like cereals, will absorb some of the moisture from the fudge and will no longer be crispy.

If you’d prefer to use a different kind of dark or milk chocolate, you can substitute it at a one to one ratio. For white chocolate, you’ll want to use a half can of sweetened condensed milk (about seven ounces) instead of the full can.

Thick sauces and jam can be added to the top of your fudge once it’s been poured into the prepared cake pan or casserole dish and swirled to blend. I don’t recommend using more than 1/4 cup, otherwise your fudge may become too soft.

For the white chocolate raspberry fudge pictured above, I used a 1/4 cup of raspberry jam.

For traditionally made fudge it can be an indication that the candy wasn’t cooked long enough or didn’t get hot enough.

Because this recipe uses sweetened condensed milk, which acts much the way the sugar syrup in traditional fudge would, graininess shouldn’t be an issue. That’s because this recipe skips that syrup step all-together, thus eliminating the chance that something might go awry.

For traditional fudge, graininess is often a sign that the fudge was stirred when it shouldn’t have been, creating sugar crystals.

For this recipe, crumbly fudge can be an indication that the fudge has not been stored properly; If it’s not kept in an air tight container, it will likely get crumbly over time.

For traditional fudge, being crumbly is often a sign that the fudge was overcooked.

Can fudge be frozen?

Yes! Fudge can be stored in an air-tight container for up to 3 months in the freezer. To thaw it, simply place it in the refrigerator and let it thaw overnight.

How long can fudge be stored?

Fudge can be stored for up to 3 weeks in the refrigerator or up to 3 months in the freezer.

Will fudge stick to aluminum foil?

Yes. Although you’ll see some recipes that direct you to line your dish with foil, you’ll want to make sure to lightly spray it with cooking spray first to keep your fudge from sticking to it. Personally, I prefer to use parchment paper. For this microwave fudge, you do not need to oil the parchment paper.

Can fudge be used to make fudge sauce?

No, fudge (the candy) and fudge sauce are different and one cannot be used to make the other.

The basic recipe, which calls for chocolate, butter, sweetened condensed milk, vanilla extract and salt is gluten-free. However, depending on what you add, the end product may not be. Some cereals, spice blends, cookies and other additives may contain gluten.

This microwave fudge takes just 5 ingredients and a few minutes to make!