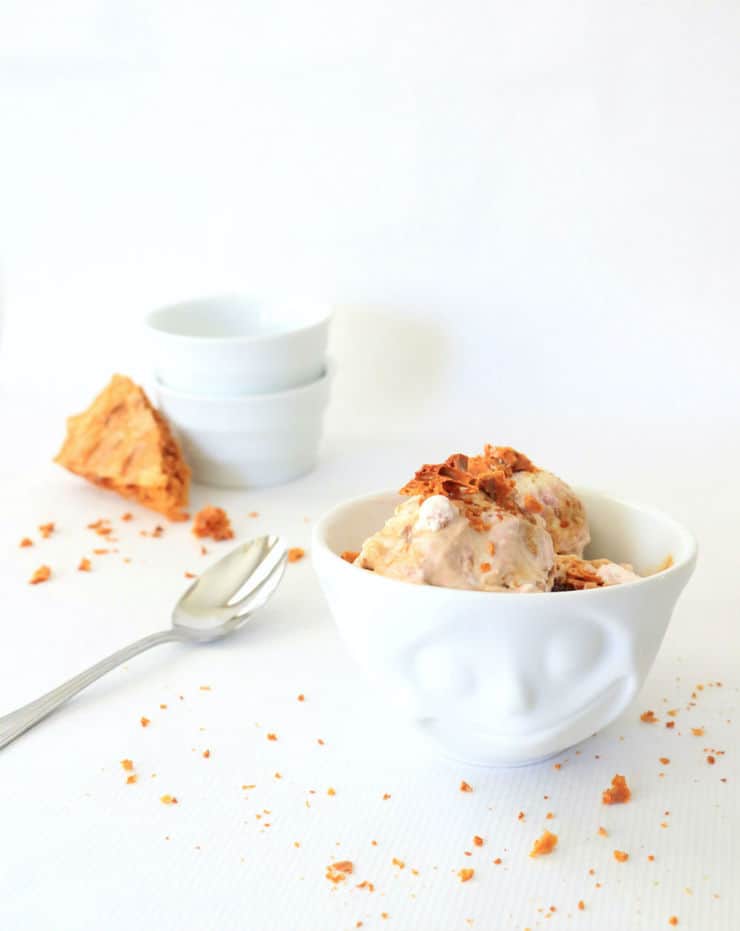 My parents planted tons of lavender shrubs when they moved to the house they live in, and ever since I came to visit this year I’ve been watching and waiting for them to bloom (think face-pressed-against-the-window-willing-them-to-grow sort of a thing… obviously my Jedi mind powers need some work). And so finally, in my final week here they bloomed. Lavender is such an amazing flavor to work with, but there’s such a fine line between yummy and bar-of-soapy with it. I knew I wanted to make a lavender ice cream, but given it’s naturally bitter flavor, I wanted a *POP* of sweetness. And then I discovered honeycomb candy. If you looked up “Pop of sugary goodness” in the dictionary, it would have a picture of this candy next to it. And so it was that this delicious ice cream was born… and then quickly devoured.

This recipe really is a lot of fun to make and surprisingly easy, except if we’re talking about the willpower to not dive into the freezer and eat all the ice cream before it’s had a chance to harden. If that’s what we’re talking about then it’s hard, very very hard. Depending on where you live in the world, you may have access to ready-made honeycomb candy, but it’s just as easy to make and a whole lot more fun. To make the candy, start by lining a 10 inch cake pan with greased parchment paper. In a saucepan over high heat, combine your sugar, honey, and water, and stir until everything is combined. Let your mixture combine to a boil and turn amber (300*F/150*C) before removing it from the heat. Quickly stir in the baking soda until it’s just combined (you really don’t want to over stir this). Be careful when you’re stirring in the baking soda because the candy releases a lot of gas from the reaction that is particularly uncomfortable for the eyes and throat. Immediately pour the candy into your prepared cake pan, allowing it to spread out on its own (if you try to spread it with a spatula, you run the risk of pressing down the air bubbles inside that give the candy its trademark look and texture). 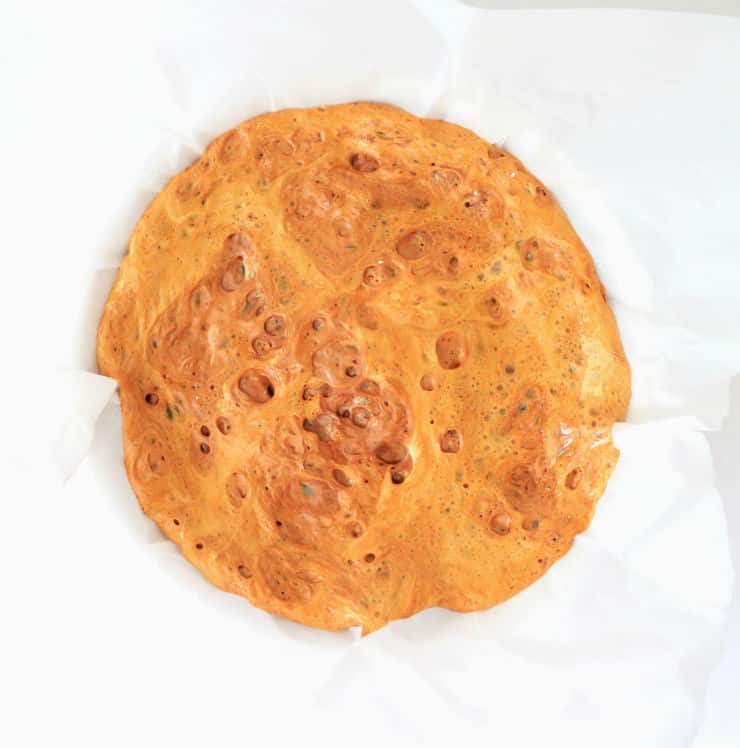 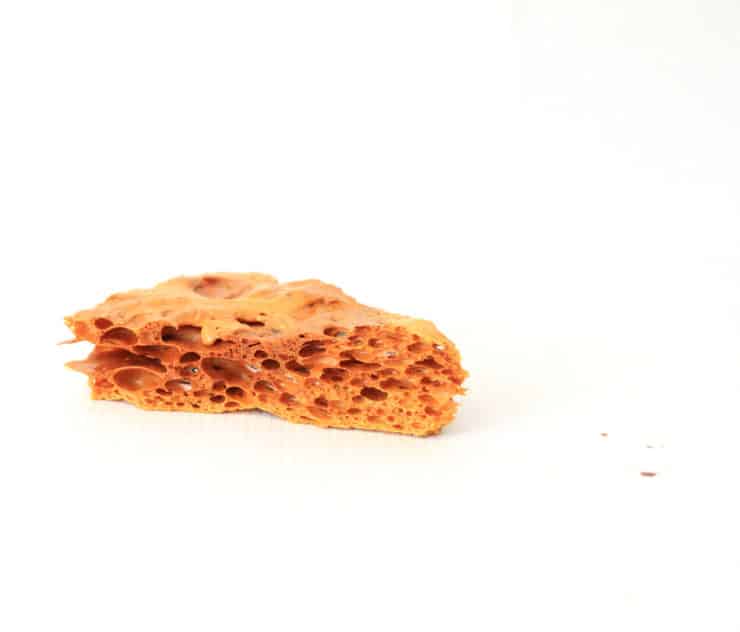 The candy will need about 30 minutes to cool and harden, which is just about the same amount of time the lavender will need to steep. In a small mug, combine your boiling water and your lavender. Allow it to steep, stirring occasionally. Once your candy and lavender water have cooled completely, you’re ready to start your ice cream. In the bowl of a stand mixer using your whisk attachment, beat your heavy whipping cream until stiff peaks form. Add the sweetened condensed milk and 3-4 tbsp. of lavender water, and beat until the mixture returns to stiff peaks. Fold in a little purple food coloring if you want a swirl effect. 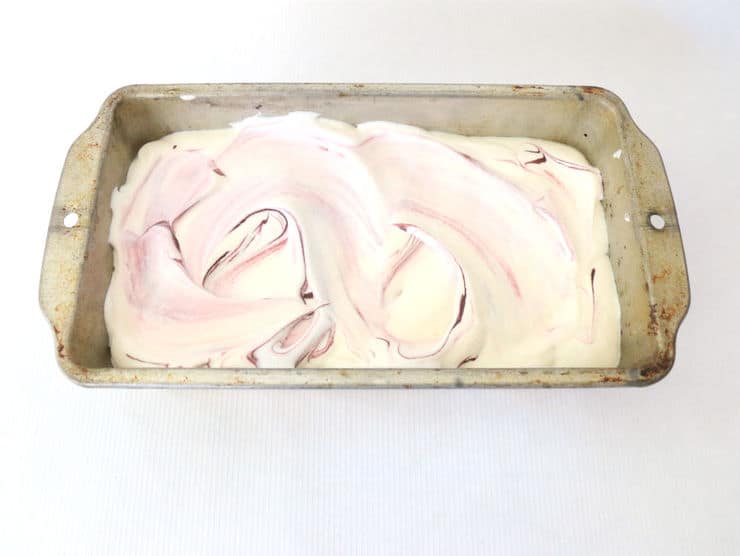 Break up your honeycomb candy and alternate layers of ice cream and honeycomb in a large loaf pan. The honeycomb will soften from exposure to the ice cream, so if you like a little crunch, it’s a good idea to reserve some of that honeycomb for topping the ice cream later. Allow your ice cream to set up overnight before serving. 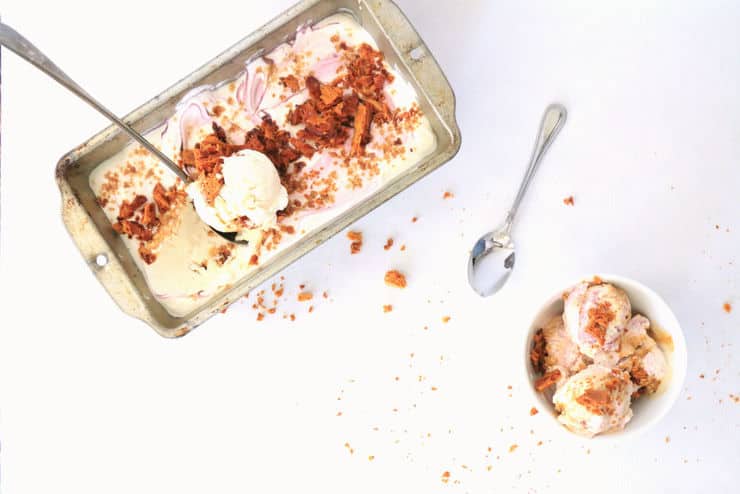 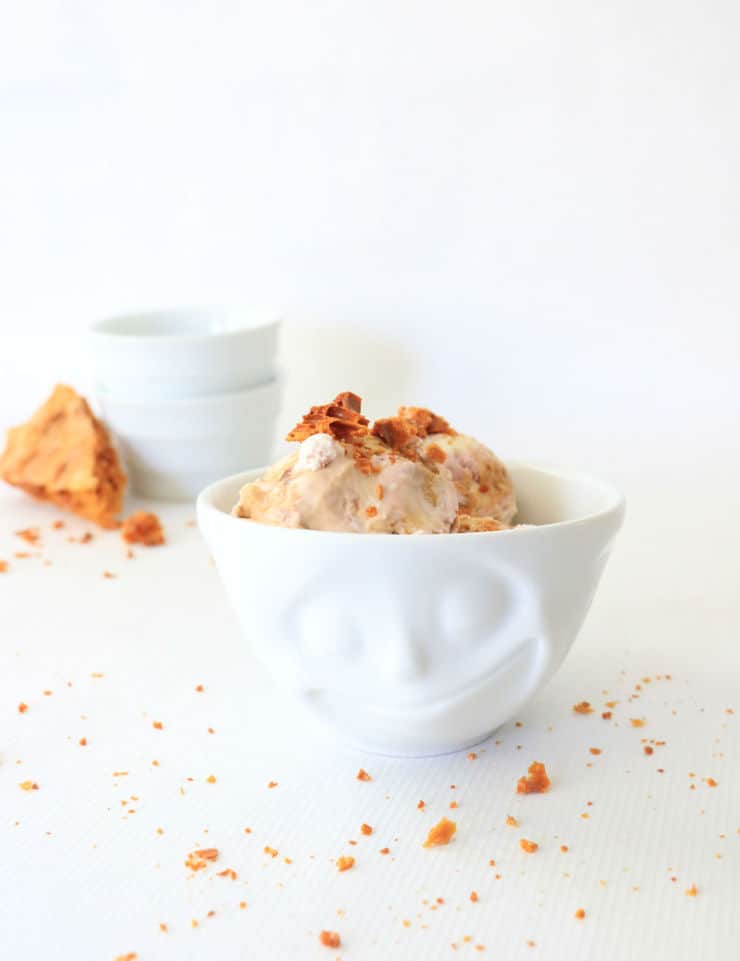