Home » Desserts » Cupcakes » May the 4th Be With Your Cupcake Toppers! 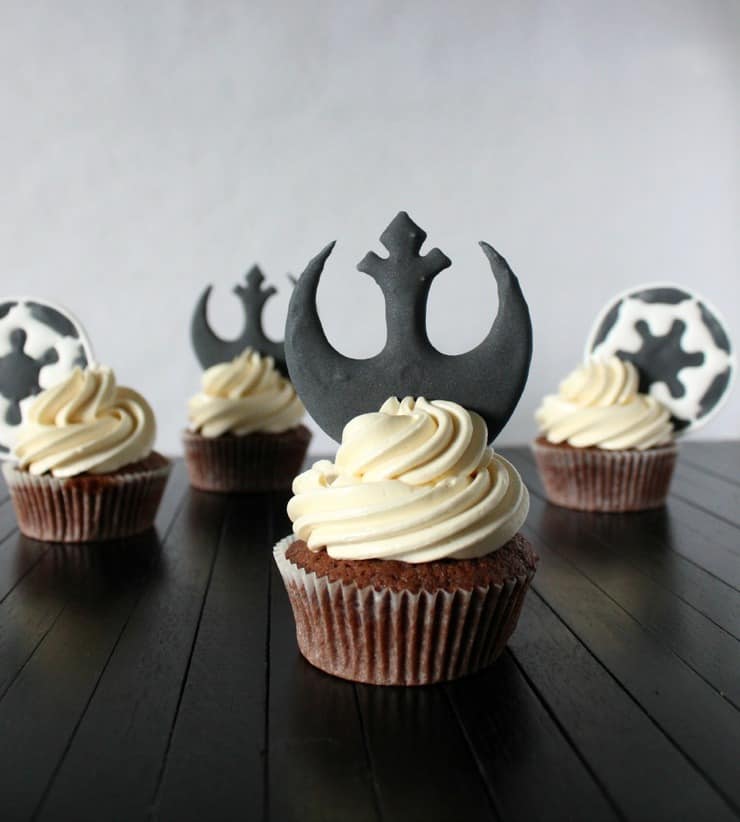 Ok, I know it’s not quite May the 4th, but I’ve gotta give you a little lead in time, right? And these Star Wars cupcake toppers are so simple to make, you can easily whip them out in an evening. Don’t feel like pulling out the kitchen mixer and whipping up some royal icing? Don’t worry! I’m including some printable templates that can double as cupcake toppers themselves. May the 4th be with you!

What you’ll need:
A batch of royal icing
Black food gel coloring
Templates (provided below)
Wax paper OR page protectors
Some cupcakes for your awesome toppers!

Before we jump into the how-to, I want to warn you that these royal icing cupcake toppers (or transfers, if you will) will need to dry overnight and they also shouldn’t be put on your cupcakes until the last minute (royal icing can absorb moisture from the frosting and become slightly discolored). Just something to keep in mind when making them. You can download and print your awesome Star Wars templates here and here (A note about copyright: I do not own the images contained within these files. They are the property of Disney and Lucas Films and are meant for personal use only). 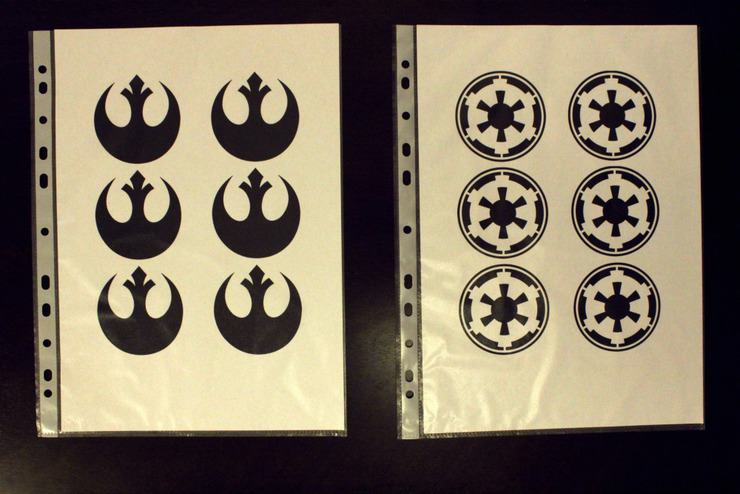 To make your toppers, you’ll want to print off your templates and tape them down to your work surface, taping your wax paper over top of them. I’ve actually started using page protectors instead of the wax paper, and would highly recommend them! The page protectors not only keep your images from moving around, but they allow you to easily turn the whole thing, rather than having to work over already iced areas. Once your images are secured in some way, you’ll want to whip up a batch of royal icing. Starting with a few scoops of white icing (in a piping bag) thinned to a 20 second consistency, pipe the white edge and inside of the Galactic Empire emblem. Use a toothpick to work the icing around to fill in any areas that need it. 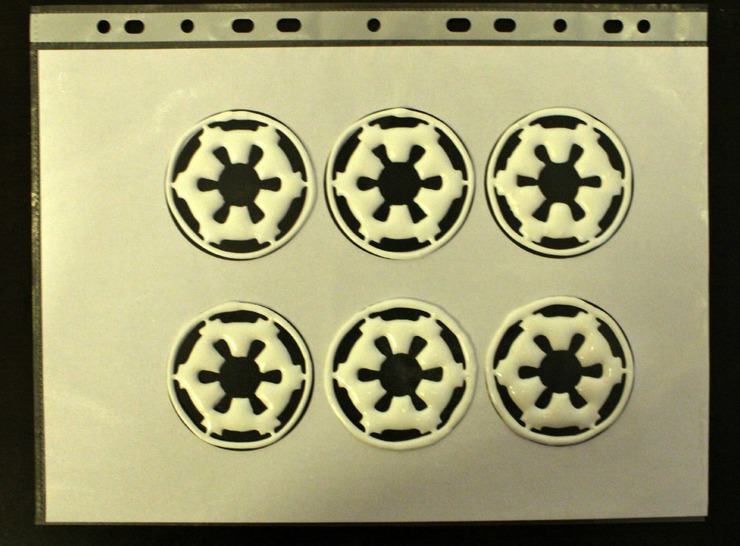 While the white icing sets up, mix up some black icing (again, 20 second consistency). I recommend starting with the Rebel Alliance emblems so the white has a little more time to set up. This will help prevent any bleeding between the two. With your black, pipe around and fill in the Rebel Alliance emblems, using a toothpick to move around the icing (particularly out towards the points). Once you’re done with those, you can move on to filling in the gaps in the Galactic Empire toppers. 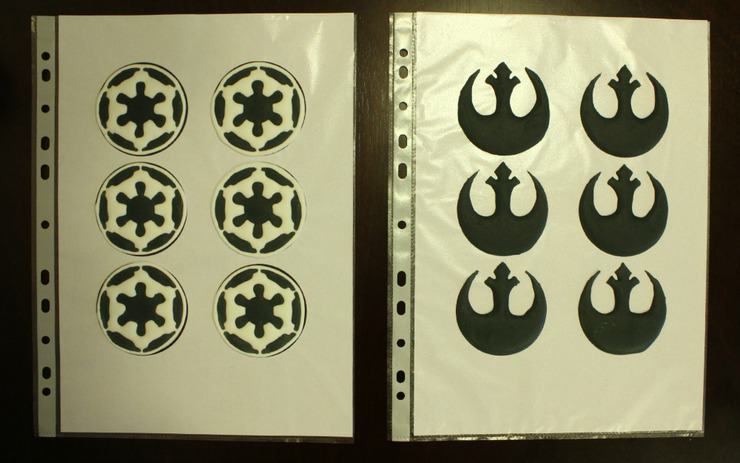 Let your toppers dry overnight so they’re completely dry before you try removing them. To remove them from the page protectors/wax paper, gently life the plastic and peel it away from the royal icing (trying to hold the royal icing and pull it off the plastic will usually result in breaking). Be sure to make a few extras just in case some break. To attach them to your cupcakes, gently press the  toppers into the frosting. Because of their size, these work perfectly lying flat on top of the cupcake, or standing in the frosting. 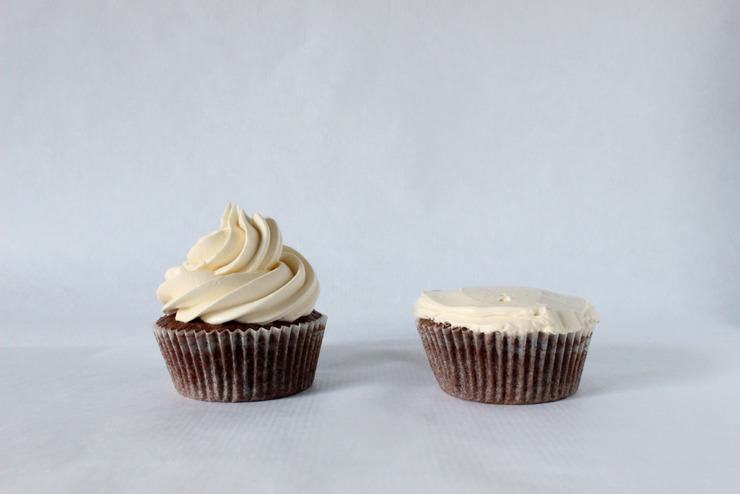 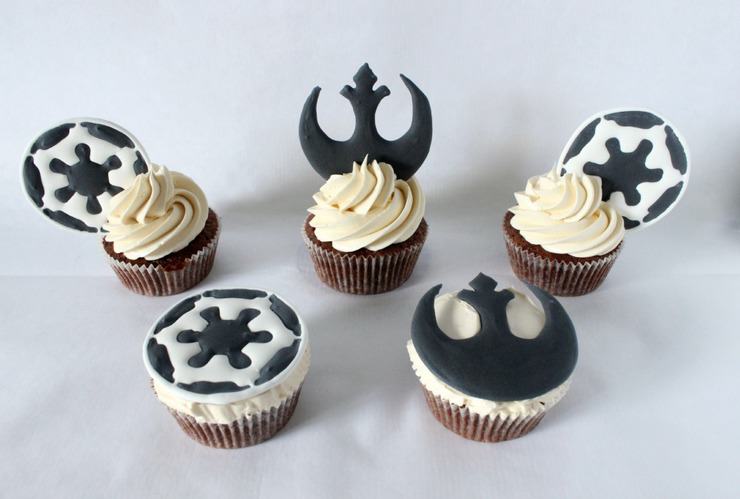 Be careful not to add your toppers too early as royal icing has a tendency to absorb any excess moisture from the frosting and become slightly discolored. 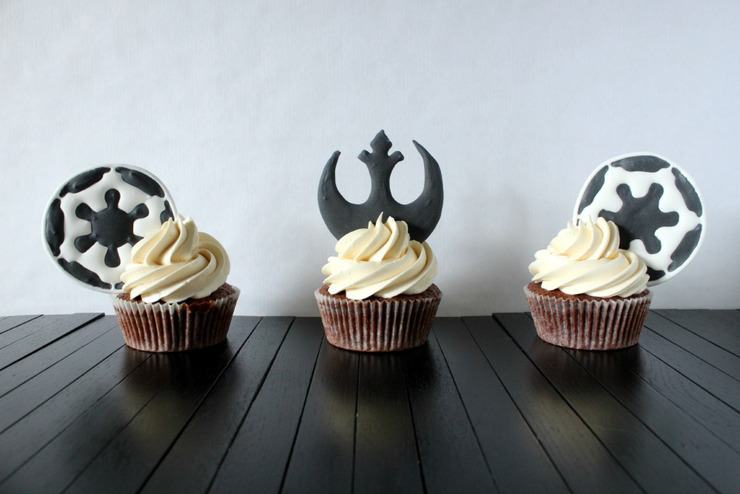 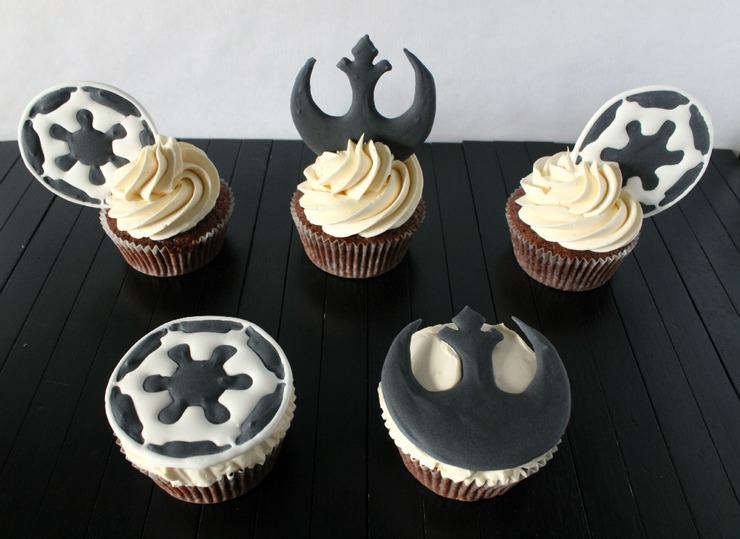 Happy baking and May the 4th be with you!