Home » Desserts » Cupcakes » How Much is That Doggy in the Window?

With my brother-in-laws birthday steadily approaching, and a whole slew of baking already planned and in the works, I was struggling to find something to make for his birthday. I like to make personal baked goods for family members’ and friends’ birthdays, something that they’ll not only like, but love! For his girlfriend’s birthday I’d whipped up a batch of her favorite Ben and Jerry’s ice cream in cupcake form. For my father-in-law’s birthday, I whipped up cupcakes topped with royal icing logos for his favorite brand of motorcycle. But my brother-in-law… I was just at a loss. Mostly I think I was just mentally fatigued from being creative with my Halloween baking. But that’s when I remembered: my brother-in-law and his girlfriend were about to receive a Bulldog, something my brother-in-law has been wanting and talking about for as long as I can remember. And what perfect timing for some cupcake inspiration!

Start by making a dozen cupcakes. Since they’ll be covered with fondant, you can make any flavor you like. If you need some suggestions, my go-to favorites are red velvet and plain chocolate. Once your cupcakes have cooled, you can frost them with a thin layer of frosting, trying to keep the top as flat as possible. If you can’t purchase pre-made frosting (like where I live), you can easily whip up some buttercream frosting. In a small bowl, cream the 100 grams of butter until smooth. Add the powdered sugar and vanilla extract, and beat until the frosting becomes smooth and creamy. Voila! Buttercream ready for frosting. 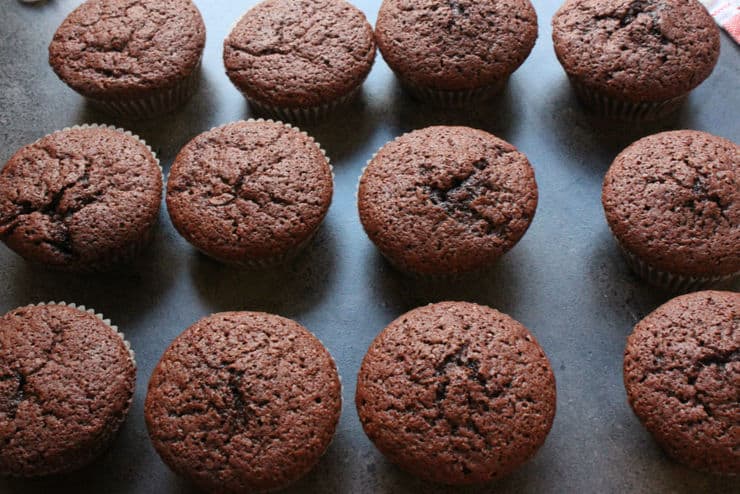 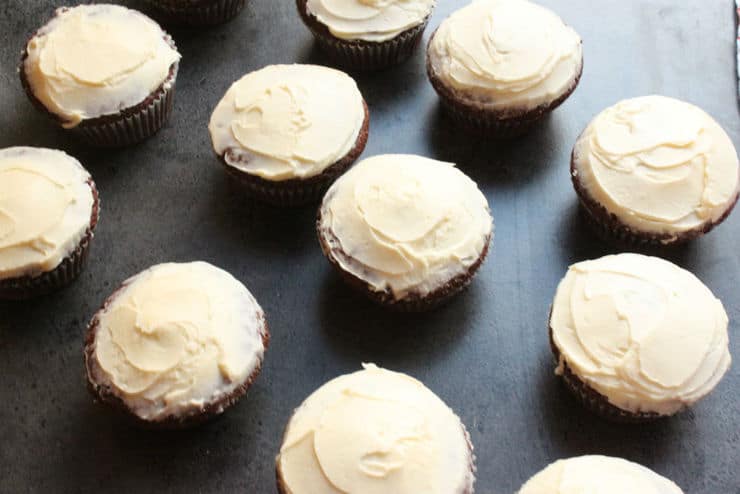 Once your cupcakes are frosted, you can move on to the fondant decorations. I know fondant may not be readily available to purchase for all of you (I ship in a pack or two from the States from time to time so I don’t always have to make it), in which case you can make your own using this marshmallow fondant recipe. Once you’ve got your fondant, color a large fistful brown. Whenever you’re tinting fondant, it’s a good idea to grease your hands with something like Crisco so that the fondant stays soft and pliable, and the food dye doesn’t stain your hands as you’re kneading it in. Once the fondant is the color of brown that you want, roll it out to about a 1/4″ thin. With a round cookie or biscuit cutter the size of the top of your cupcakes, cut out 12 circles. Gently stretch each circle over a cupcake and tuck the sides just underneath the top. Keep the leftover fondant for adding the ears later. 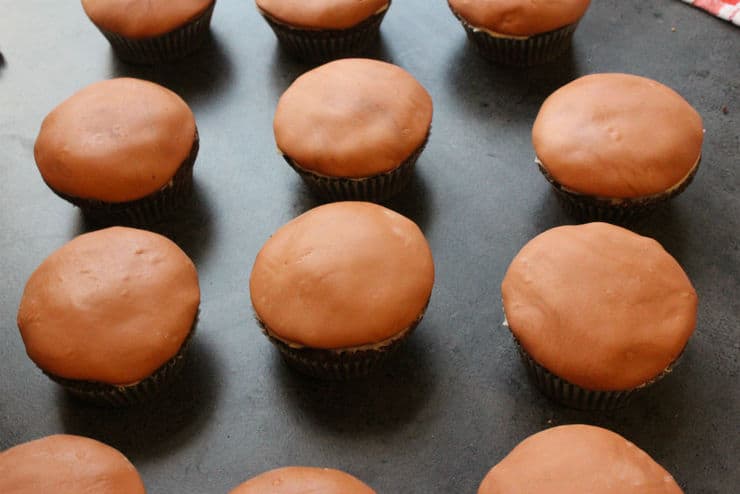 Now on to the face stripe and the muzzle! Roll out some white fondant to about a 1/4″ thick and cut into small strips about 1/2″ by 1 1/2″. Flatten the edges so they’ll blend into the face a little better. Using a small amount of water, brush the back of the white fondant, and gently press it onto the cupcakes. This will create the head stripe. Once you’ve added all of your stripes, it’s time to make some muzzles. Roll small balls of white fondant about a 1/2″ thick, and gently flatten them into flat ovals. Using a toothpick or wooden skewer, gently press a line down the width of the oval starting about a 1/4 of the way in. Pull the ends of the muzzle down so that they bend along the line you just created. Brush the back of the muzzle with a little water and gently press it onto your cupcake just over the end of the head stripe. Using your wooden skewer or toothpick, dot the muzzle with tiny pinpricks to imitate the whisker spots Bulldogs have. Still using the white fondant, roll balls about the size of the tip of your pinky for the chins, and gently press them into the cupcakes just under the center of the muzzle. Use a toothpick or wooden skewer to tuck the edges under the muzzles. 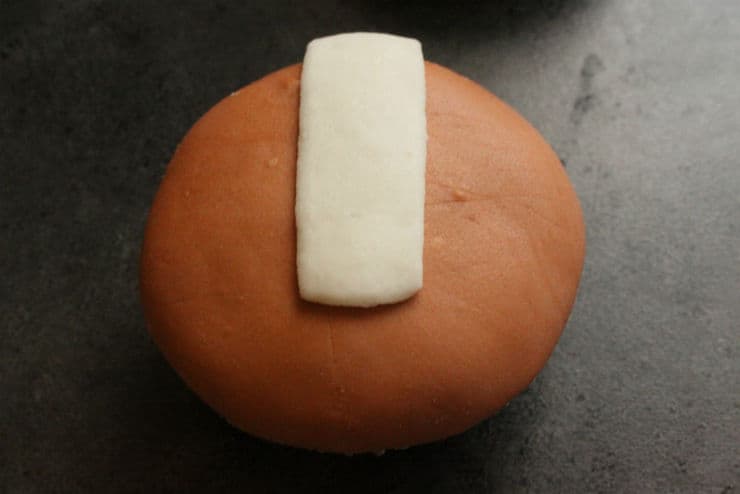 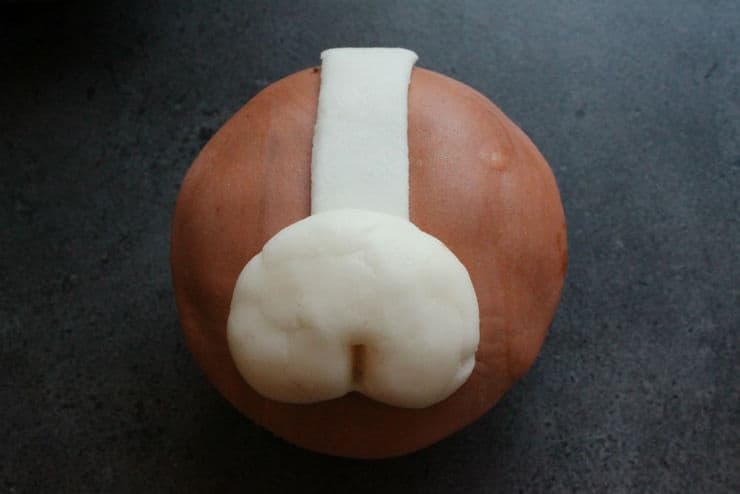 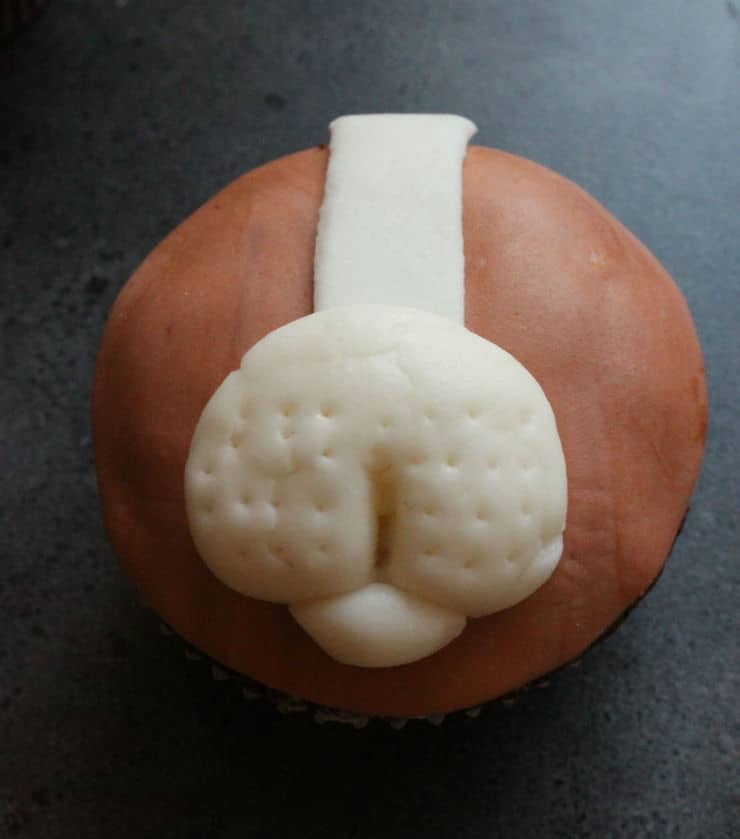 With the muzzles in place, we can now move on to adding the noses. I chose to make the nose for this cupcake pink, as that’s what the dog in question had, but you can easily color the noses black if you’d prefer. Take a small chunk of white fondant, and tint it the desired color for the nose. With the tinted fondant, create ovals just slightly larger than your pinky nail and gently press them into the top of the muzzle. Using your toothpick or wooden skewer, create nostrils on either side of the division in the muzzle. To finish off the muzzle in true Bulldog fashion, we need to make a muzzle wrinkle. Take a small ball of white fondant and roll it into a thin log just long enough to wrap around the muzzle. Gently press the fondant around the muzzle and tuck the ends underneath using your toothpick or wooden skewer. Unfortunately, I didn’t think to add the muzzle wrinkle until the very end, but I really recommend doing it at this point so it doesn’t interfere with the eyes. Now your muzzle is finished and we can move up to the ears. Remember that brown fondant you put aside? Take that and roll it out to about a 1/4″ thick. Cut the fondant into 24 flat tipped triangles. Using your toothpick or wooden skewer, gently press the wide end of the ears onto either side of the white head stripe, and drape the ends of the top. You may need to gently press the tips into the cupcake tops to get them to stay bent over.

And now the final step: the eyes. I happened to have some leftover royal icing on hand, so I cheated and used that instead of fondant. If you want to go the royal icing route, tint two small bowls of icing to a 20 second consistency (more information about royal icing and consistencies here). Spoon the icing into piping bags, create two divots on either side of the head stripe for the eyes (not doing this will cause your icing to run down the sides of the head… Yep, that happened to me), and pipe a small amount of white icing into each, followed by enough black icing to cover almost all the white. If you just want to do the eyes with fondant, it’s super easy! Just tint a small amount of fondant black, and form small discs of black and white fondant, with the white discs being only slightly larger than the black. 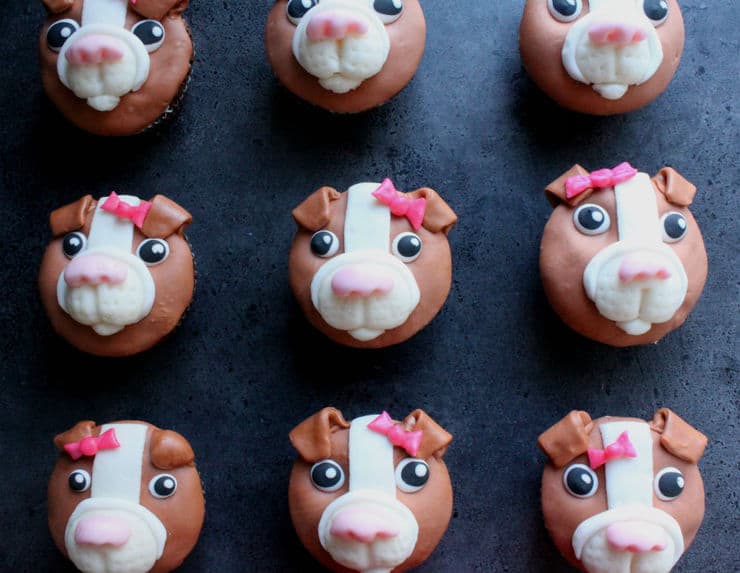 And presto! You’re done! Since the Bulldog my brother-in-law’s getting is a girl, I opted to add pink fondant bows as well. Just for the heck of it. 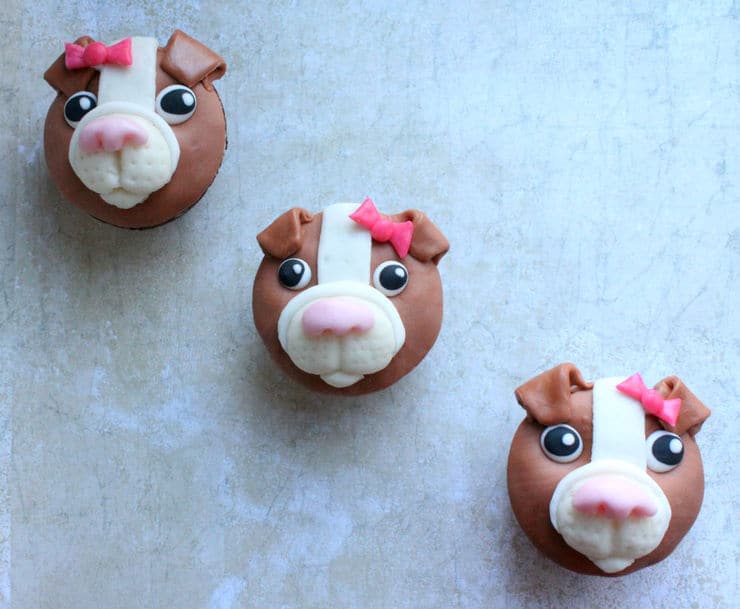 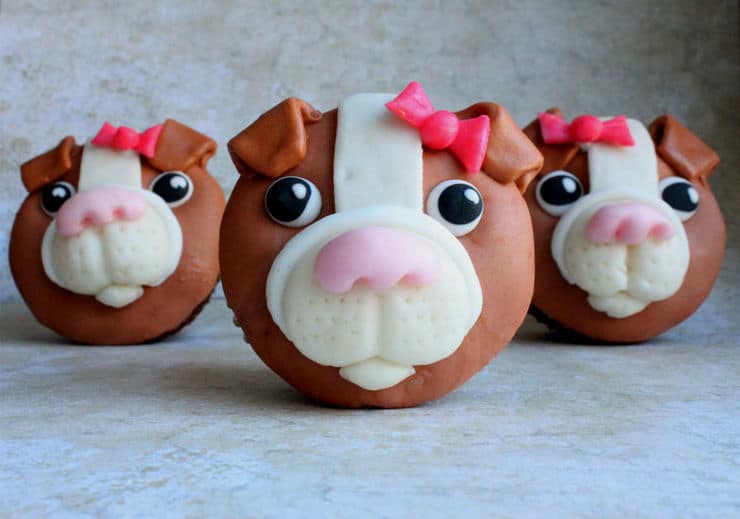