For my birthday my parents gave me a book on making and baking macarons. I was so excited to try them out, yet somehow they kept getting put on the back burner. But as I was looking through my cupboards the other day, thinking about what I wanted to bake next, I came across my unopened bag of almond flour and decided to take the plunge and try macarons. Unfortunately, I failed. Miserably. I didn’t even get passed the meringue stage before I ended up with a big pile of badly mixed glop. The next couple of days I stewed over what went wrong. Should I have aged my egg whites after all? Were they too fresh since they came direct from a local farmer? Did I need more egg white powder? In the end I decided to take a step back and go with something I already knew how to make. I’d had such success with the royal icing made from powdered egg whites, I decided to replace my eggs entirely with egg white powder and water. And boy, did that do the trick! Want to make macarons? Here’s a foolproof (if slightly nontraditional) method!

For the filling:
1 jar Nutella

Start by creating a template for your macarons. Because macarons can be finicky, and are quick to go from under-baked to over-browned, it’s important that they’re as uniform in size as possible. For those of you with a printer, you can print out a few templates from Les Petits Macarons. You can also create your own piping guide by stenciling around a circular cookie or biscuit cutter on the underside of your parchment paper (like I did). Be sure to also cut out several sheets of parchment paper to line your cookie sheets. 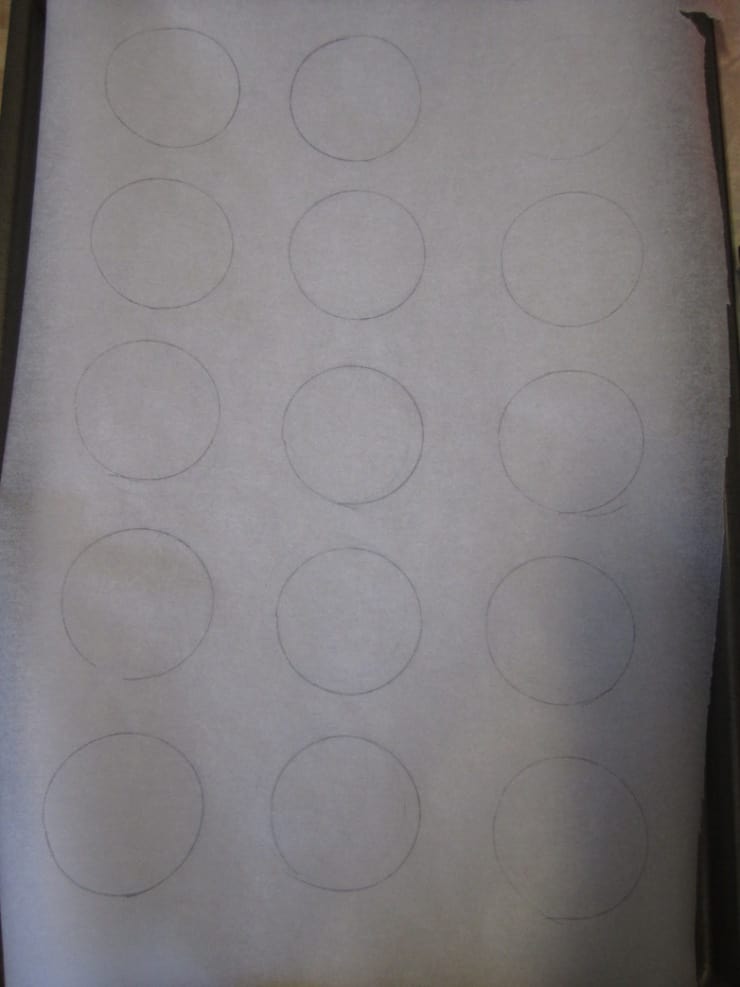 Once your template and parchment paper is ready for your macarons, you can start making them by preheating your oven to 200* Fahrenheit (95* Celsius). In a large bowl, whip the egg white powder and water until frothy and all lumps are gone. This latter point is particularly important as those egg white lumps won’t whip out later. Add the granulated sugar and whip on medium speed until the mixture stiffens, about 6-8 minutes. The meringue base is ready when the bowl can be turned upside down and the meringue doesn’t budge. Be careful, however, not to overbeat your meringue as this can lead to cracked macarons later on. In a separate bowl, combine the almond flour, powdered sugar, espresso powder, and baking cocoa. Stir with a fork until all ingredients are well incorporated. The recipe I worked from recommended pulsing the dry mixture in a food processor to get a smoother texture for the shells, but seeing as I didn’t have one on hand I went right to stirring it in. The result: a little coarse texture but nonetheless a smooth top. To incorporate the dry ingredients, pour them into the meringue, and using a spatula, gently fold them in. Turn the bowl as you work, and draw the spatula from top to bottom across the middle of the bowl, and up the side. Do this until ingredients are just incorporated. Again, be careful not to over mix as this can cause cracking in the shells later. 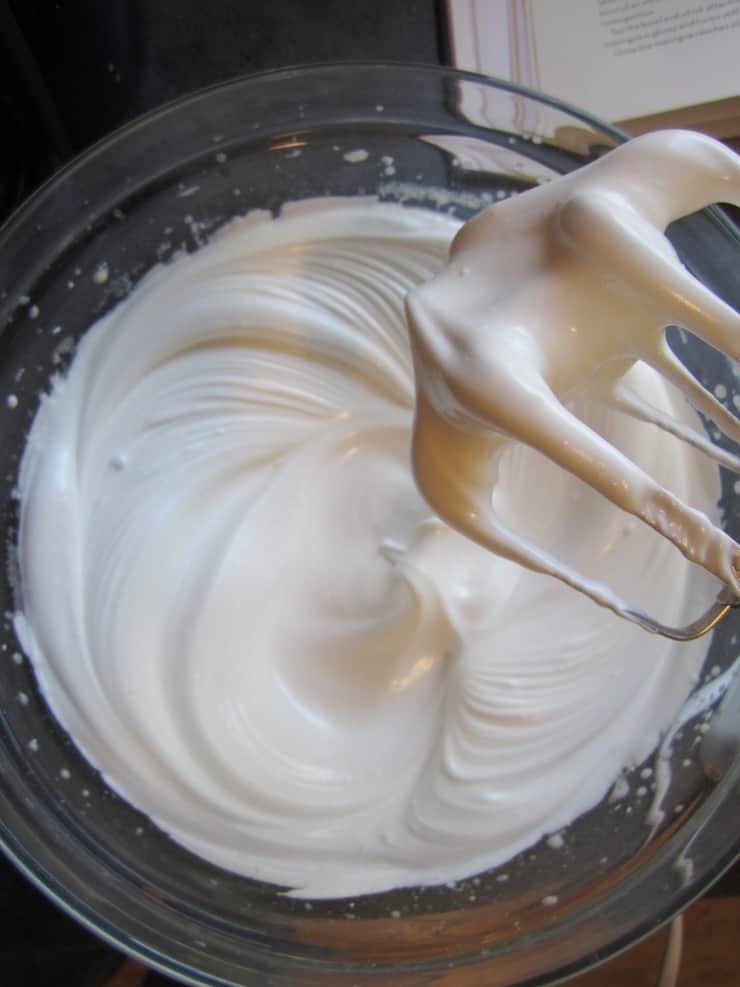 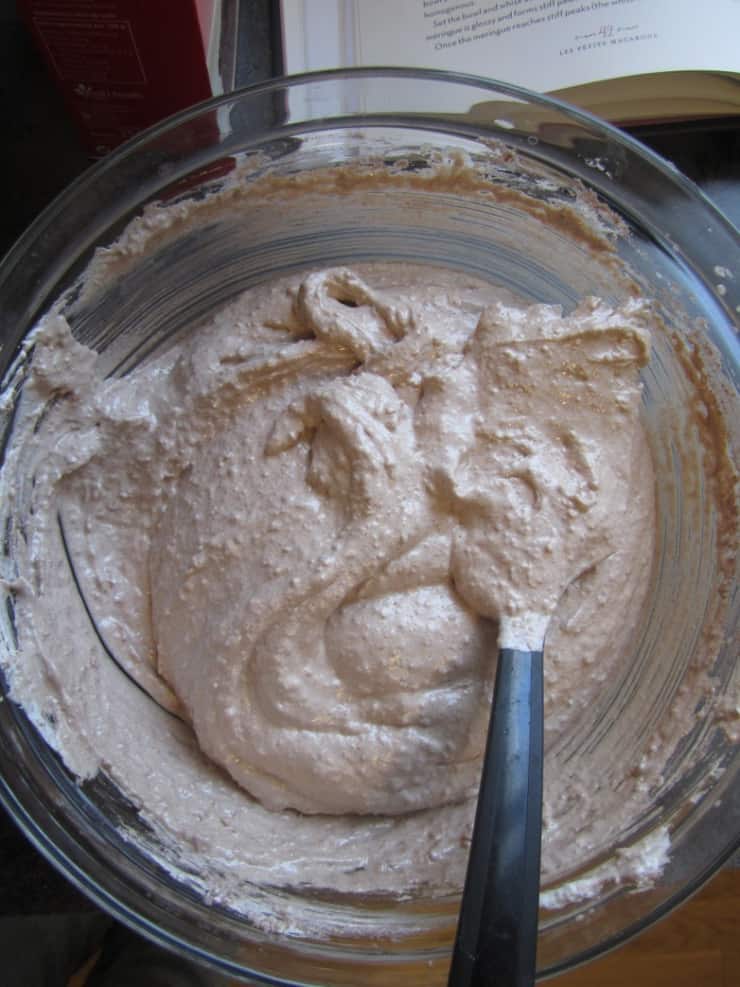 Spoon the macaron batter into a pastry bag and using a wide, circular tip, pipe the macarons onto a parchment paper lined cookie sheet. Be sure to only pipe one sheet at a time, and keep the batter wrapped in the piping bag while each sheet bakes. I tried to pipe several sheets at once and ended up with cracked shells as the result. Bake the shells at 200* Fahrenheit (95* Celsius) for 15 minutes, before increasing the temperature to 350* Fahrenheit (175* Celsius) for 10 minutes. The shells are ready when they can be peeled away from the parchment paper without sticking. Turn the oven back down to 200* Fahrenheit (90* Celsius) and pipe the next batch of shells. Be sure to let the oven get down as close to 200* Fahrenheit (95* Celsius) before adding the new batch. 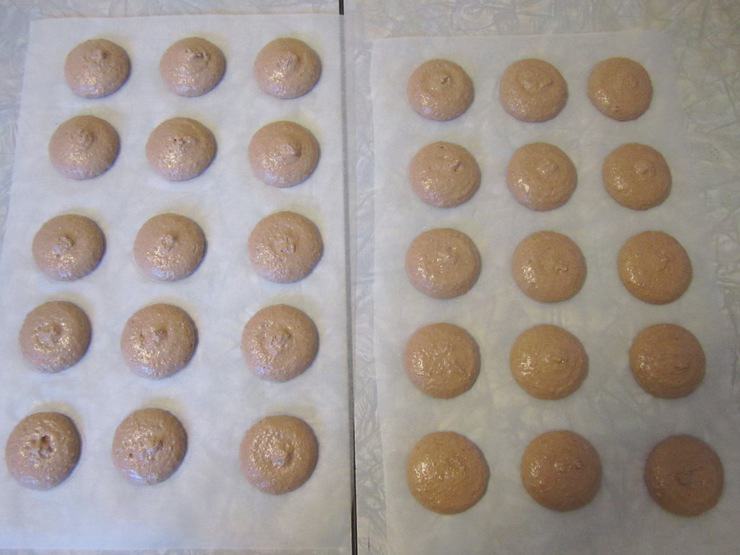 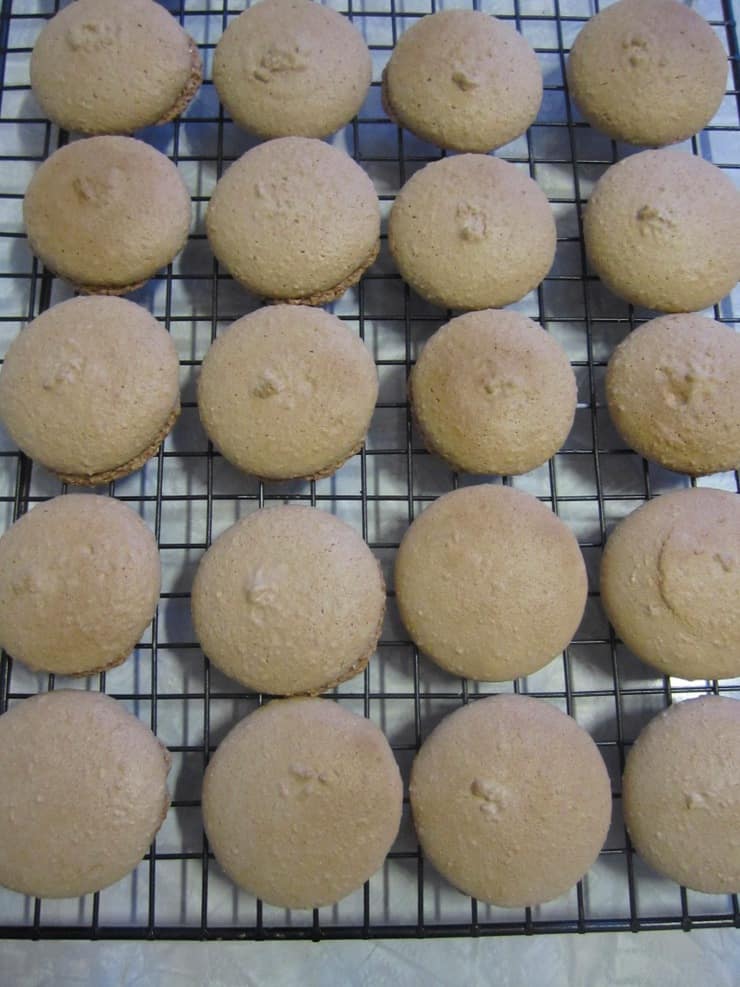 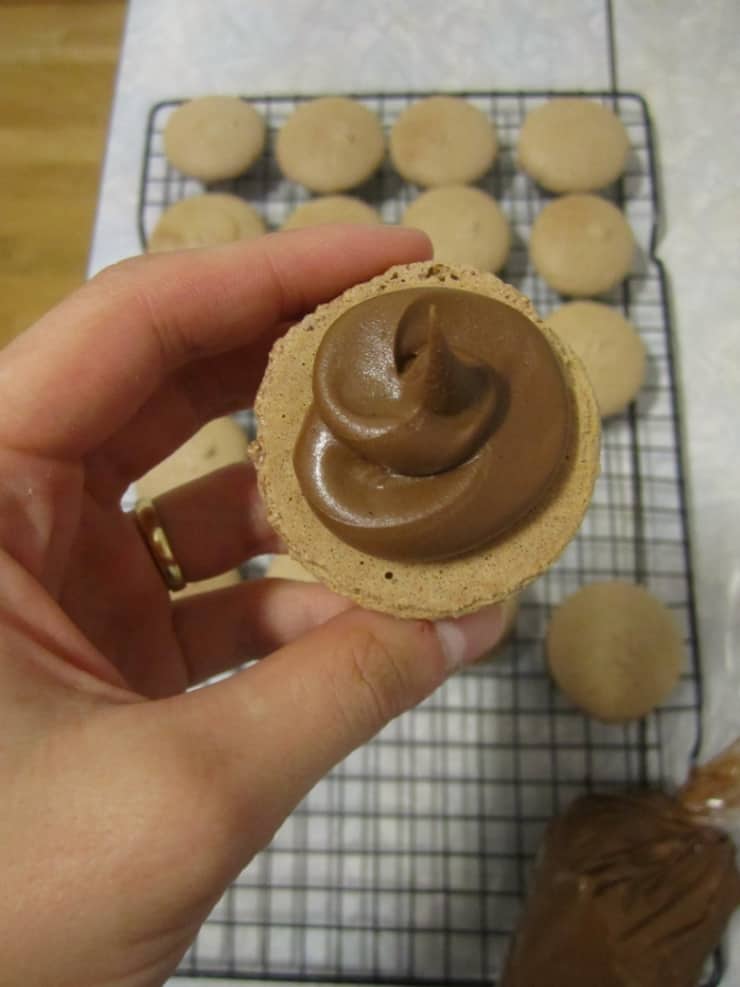 Let the shells cool on the parchment before removing to a wire cooling rack. The shells should be completely cooled (about an hour) before filling. You can use all sorts of filling, but I decided to go the lazy man route and use the jar of Nutella that’s been sitting unopened in my refrigerator. To fill, pipe the filling onto the flat side of the shell using a large tip. Be sure to leave some space between the filling and the edge as pressing the two shells together with move the filling outwards. 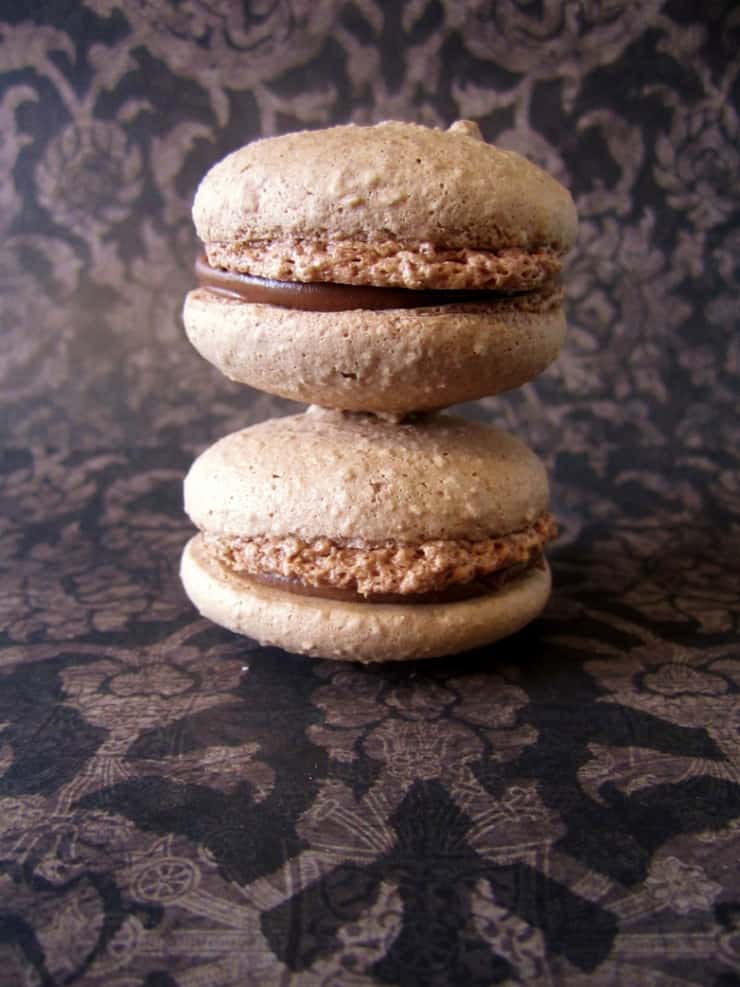 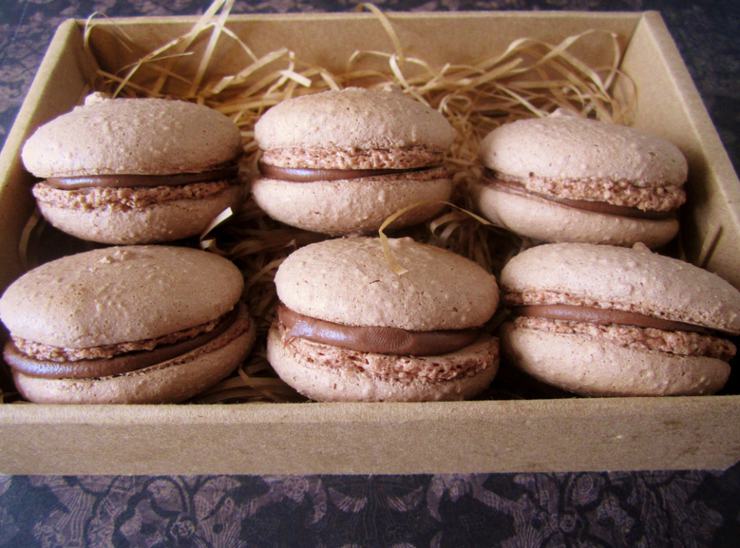