This past week, my boss showed up to work with some fresh picked apples from his home that he was anxious to give away. I’m always delighted to get fresh, home-grown produce, so when he asked if I could take some off his hands, I was more than happy to oblige. Turns out we have different definitions of what constitutes “a few” apples! I was thinking I’d get a small bag, maybe a little larger bag if I was lucky. Nope. What he brought in was a 20lb crate of apples. Holy. Cow.  I managed to give some away to family and friends, but I still had a giant crate of apples staring me in the eye every time I passed the kitchen. What was I to do with all those apples? Whip them up into a delicious fall treat, of course!

Keep in mind when making these cinnamon rolls that you’ll need at least a couple of hours to let them rise, but if you’re not a morning person, they can easily be made the night before. To make the dough, mix your active dry yeast with your 1/4 cup of warm water. Let it sit for 5-10 minutes until it develops a foam. If it doesn’t develop a foam, then the yeast is no longer good and you should start over with a new pack of active dry yeast. In the bowl of a stand mix, combine all of your dough ingredients, and mix with the dough hook attachment until the dough pulls into a ball and is no longer sticky. Put your dough into a well greased bowl and let it rise in a warm place for about an hour, or until roughly double in size. 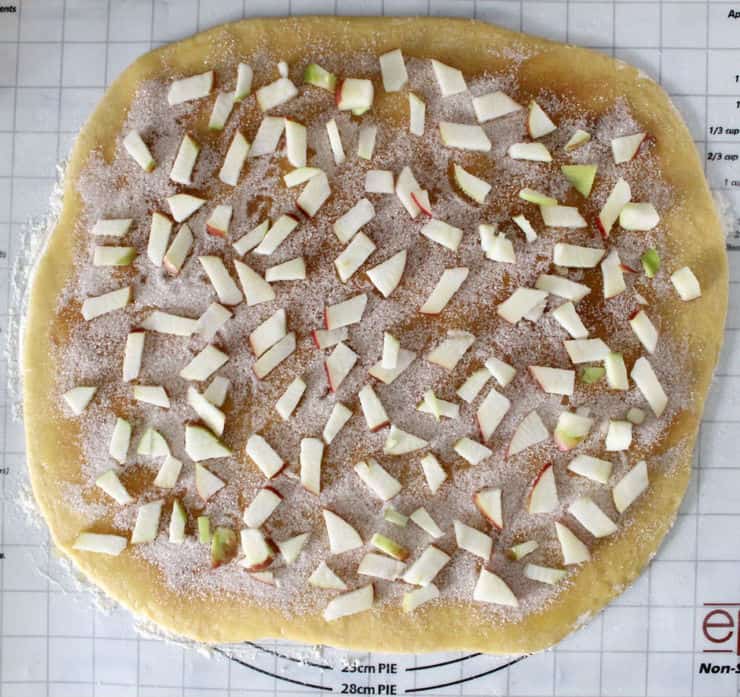 Once your dough has doubled in size, roll it out on a lightly floured surface until you have a rectangle that’s about 1/4″ thick. Spread the surface with the melted butter for the filling. I know it might seem like a lot of butter, but try to use as much as you can; the sugar and cinnamon are going to soak it up! Stir the cinnamon and sugar together, and sprinkle it over the buttered dough. Add your small pieces of diced apple, and gently roll the dough up. Slice up your cinnamon roll log into 1″ thick pieces, and arrange the rolls in two 8″ pie pans to rise (be sure to leave some space between the cinnamon rolls). Allow the rolls to rise in a warm place for about an hour, or until they’ve roughly doubled in size. 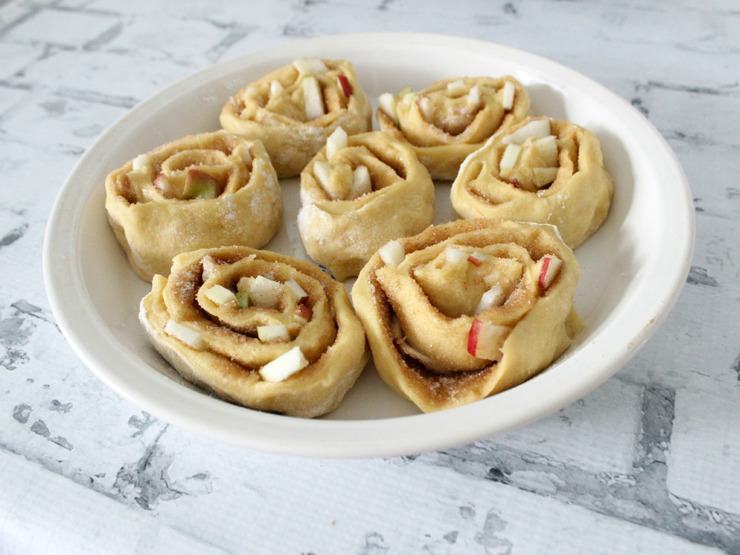 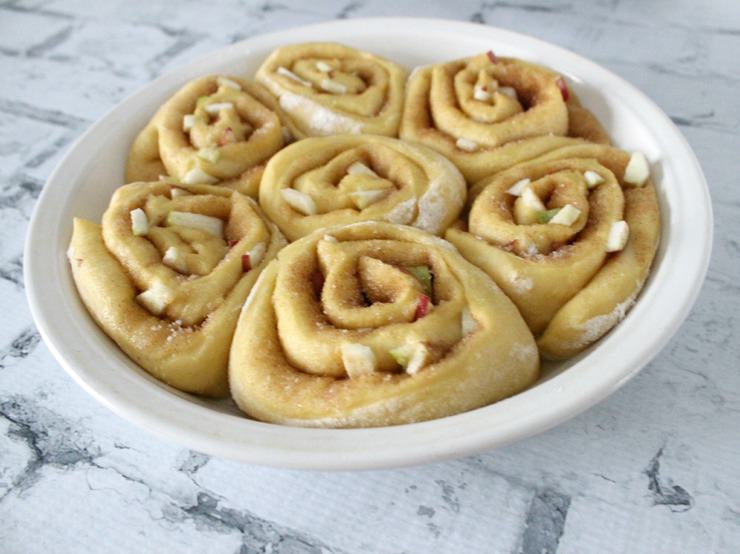 If you’re preparing these cinnamon rolls the night before you want to serve them, this is where you’ll want to stop and put them in the refrigerator. These also freeze well, so you can easily make them several weeks in advance. When you’re ready to bake them, just be sure to let them thaw in the refrigerator the night before. Bake these at 350*F (175*C) for 15-20 minutes, or until browned. 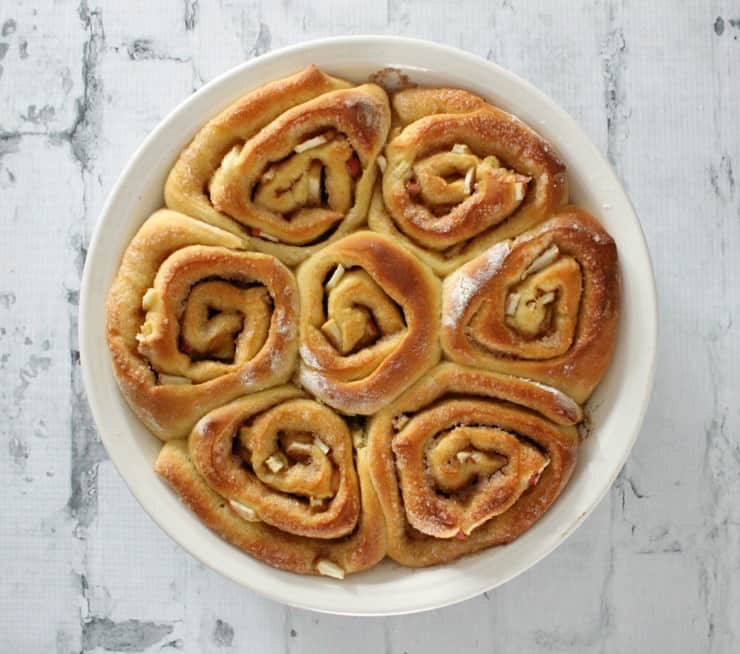 To make the glaze, stir together your powdered sugar and water (or milk) until a thick glaze forms. Drizzle over the warm cinnamon rolls and serve immediately! 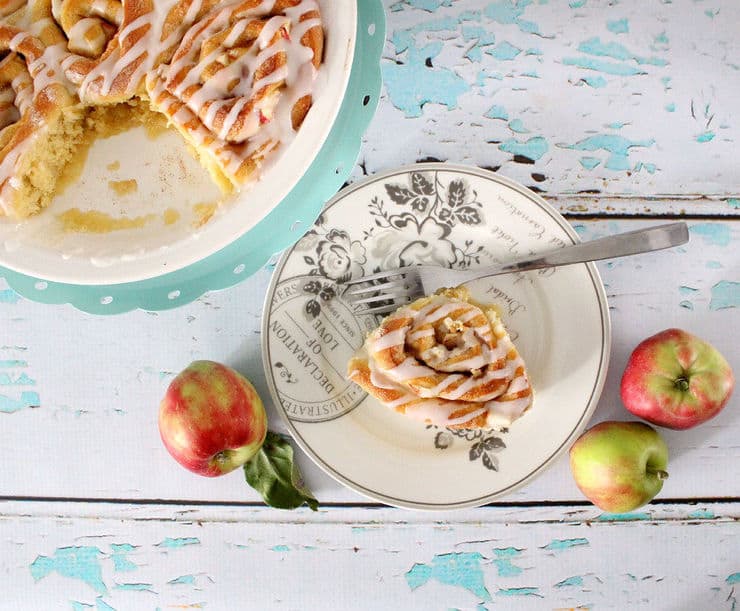 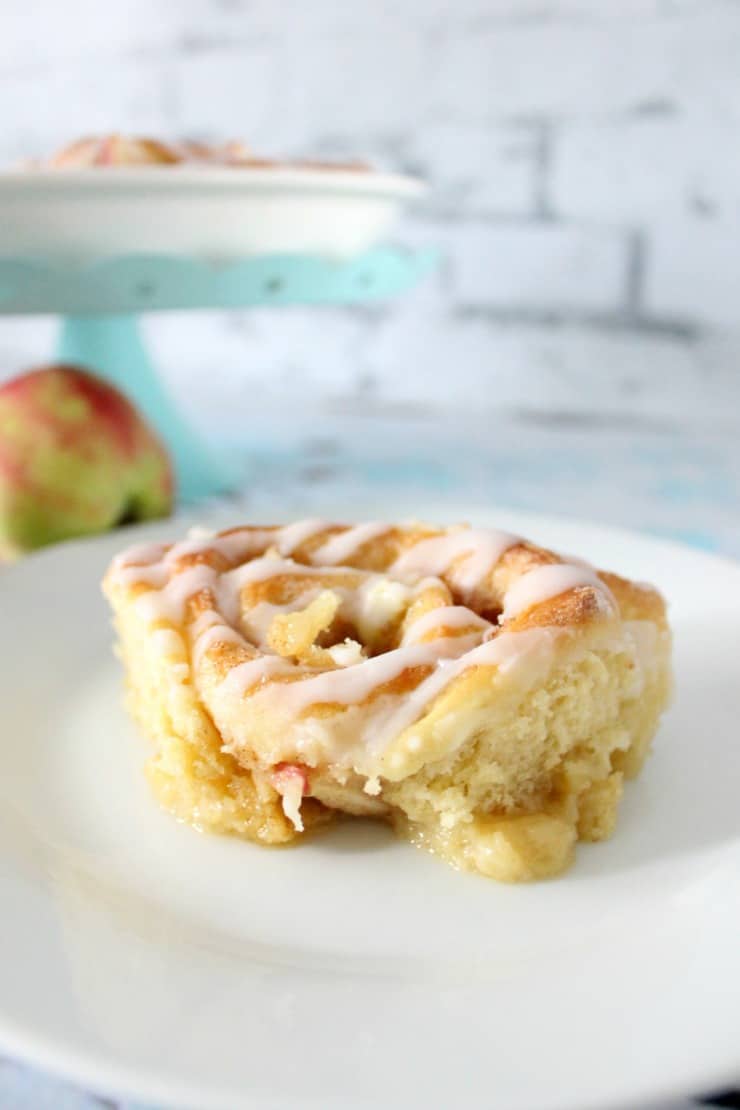 Have you ever been gifted a large amount of produce or food? What did you end up making with it? Let us know in the comments below!